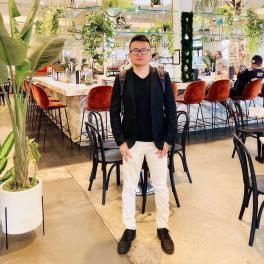 Xuefei Li, PhD in Arts Administration, Education and Policy, recently completed his dissertation defense. He was the Barnett Fellow from 2014-2016. In October, Xuefei presented his dissertation research From Cultural Creative Industry Cluster to Creative City of Film: Framing and Promoting the Cultural Creative Sector in Qingdao's Urban Competition Agenda at Social Theories, Politics, and Arts Conference (STP&A) in New Orleans.

Xuefei's research explores the dynamic cultural creative industries (CCI) development strategies in Qingdao, a port city on the northeastern coast of China, in terms of how the CCI has been framed and promoted in Qingdao's urban growth and competition agenda. Clusters are defined as geographic concentrations of interconnected companies, specialized suppliers, service providers, firms in related industries, and associated institutions in a particular field (linked by commonalities and complementarities) and that compete but also cooperate.

Xuefei first introduced how Chinese cities deal with the fierce inter-urban competition and how the cultural creative sector is positioned in urban competition context in China. He then framed the cultural sector in China and the CCI in Qingdao's Urban Competition Agenda by highlighting the instrumental value of culture in national political agenda from the 1980s to present and the public documents and policy practices in Qingdao.

In his presentation, Xuefei proposed an example of Qingdao as a creative city of film. Policy window opened when the Oriental Movie Metropolis was launched at Qingdao in 2013, the first-ever public-private-partnership-based film project in China, with an investment of $7.9 billion from a well-known Chinese private property developer and entertainment empire. This flagship project reflects three dimensions of the competitiveness agenda in Qingdao, investment-based, city branding-served, and industry ecology-facilitated.

Xuefei concluded that the creative cultural sector is framed in Qingdao’s urban competition agenda with different forms. The Cultural Creative Sector in Qingdao's Urban Competition Agenda is framed from the jumble of CCI to key industries, from the regional and national level to the international competition agenda, and from the imitative learning to entrepreneurial policy endeavors.